Level
EASY
Transportation
Helicopter
Best Season
Nearly, all months of the year except the monsoon wet times of mid-June to August. Best in springtime of March to May and autumn/fall to pre-winter from September till December
Accomodation
N/A
Meals
N/A
Starts at
Kathmandu
Ends at
Kathmandu
Trip Route
Kathmandu - Gosainkunda - Kathmandu

Helicopter Model: AS 350 B series of helicopters of Euro-Copter, France as well as popular all over the world and Ecureuil model or similar.

Fail-Safe Design, Comfortable Seating Arrangements, maximum 5 seats excluding Pilot, Suitable for all types of helicopter missions and can fly up to an altitude of above 5,000 m or 16,000 feet high.

‘Scenic flight to Gosainkunda a holy place with sacred glacial pond’
Open Trail Trek presents the “Gosaikunda Helicopter Tour”, an exclusive short and scenic air journey. The flight takes you close to the massive mountain range within Langtang Himal, a mere distance of less than an hour joy ride.
Gosaikunda, with many forms of spelling and pronounce like Gosiankunda, Gosian Kunda a small glacial lake or a pond. Located at 4,380m/14,370 feet within the district of Rasuwa, straight north from the capital Kathmandu.
Gosaikunda Heli Tour, an opportunity for all interested visitors to relax and enjoy on a holy site of Gosaikunda. A tranquil surrounding within mountain wilderness, a great escape for few hours from the busy, hustle and bustle city life of Kathmandu.
Gosaikunda, one of the major and holy sites for Hindu pilgrims as well for some Buddhism religion. A great festival is held once a year, in the monsoon times of August month. Where thousands of devotees visit this sacred place to pay homage and worship to Hindu God Lord Shiva.
Pilgrims and devotees gather at the festival called ‘Jani Purnima’ a change of holy threads, that falls in Full Moon. Where all pilgrims bathe and take a dip in the holy lake, to relinquishes the sins of a hundred lifetimes.
In mid-winter to early springtime, the Gosaikunda pond will be frozen one can walk at the rim of the icy lake.
Gosaikunda Heli Tour, in the comfort of a nice small chopper with spacious seating, takes-off from Kathmandu in the early morning. On a fine and favorable day for flying, as well as for super views of the mountain range. The flight offers tremendous scenery of Nepal’s unique and amazing landscapes, and of snow-mountains. Overlooking Mt. Manaslu and Ganesh Himal in the west with Langtang and Jugal Himal towards the north. The helicopter rises higher whirling above Kathmandu valley, heading straight north to reach our destination at Gosaikunda and its holy lake.
At Gosaikunda, immerse yourself within beautiful scenery and the pristine glacial and holy pond, with a walk around as well for a refreshing break. Where one can enjoy a cup of hot-drinks available from the nearby lodge and tea-house.
After a wonderful morning flight, with time for a stroll to stretch your legs and walk around the holy site of Gosaikund. As per the pilot decision board in for a return journey to Kathmandu, after a glorious morning adventure on Gosaikunda Helicopter Tour.

Lord Shiva, one of three gods in Hindu religion after Brahma and Vishnu, the Hindu Myth believes that Lord Shiva created the lake Gosaikunda, in ancient bygone times the world was poisoned by devils. Lord Shiva consumed all the lethal poison to save the earthly people and living beings from the deadly potion. Then Lord Shiva struck is Trident (a three-pointed spear weapon) on the ground to create fresh water and lakes. In order to dilute and wash the poison that he took, and thus a fresh Gosaikunda pond came into existence. In the early days, there were 108 ponds around the area, at present dozen of small and large are found around Gosaikunda.
According to popular belief, the huge rock at the center of the lake remains of Shiva temple and also believed that it flows through a channel directly to the holy pool of Kumbheshwor Temple located in Patan / Lalitpur one of the major city within the valley, situated south of Kathmandu City.

Fly Gosaikunda from ktm and back to Ktm

5 a.m wake-up call at your hotel with early morning breakfast.

5:30 a.m or 5: 45 a.m transfer for a short drive to Kathmandu domestic airport to check-in for the Heli flight, as well completing security formalities.

By 6:30 a.m not later than 7 a.m. board in a chopper parked a little further of a few minutes' walks.

Welcome by airline staff and captain of the Helicopter, then get seated on the back of the pilot, if there is only one pilot, passengers can take a seat next to pilot in the front also.

After getting organized, the pilot welcomes you onboard and brief you on the safety measures and route of the Heli flight, as well as the names of some famous well-known peaks. Including weather situation and duration of stop at Gosaikunda.

Slowly the pilot lifts off the engine flying high above Kathmandu city and the valley, as soon you hit high altitude grand views of Himalayan peaks appears.

The helicopter heads straight north of Kathmandu, flying high above the valley, rivers, and green hills.

As you enjoy the panorama of Himalayan peaks, then slowly the heli gains height overlooking towns and villages down below, then finally makes an easy landing on a Heli-Pad at Gosaikunda near the shore of the holy lake.

Herewith time to walk around the lake, at a given time by the pilot and as well one can have hot drinks to make the wonderful morning activities much worth-while.

After an hour or less, after enjoying a good short walk along with views, and observing some offerings and traces left by the pilgrims, then get ready for the return flight to Kathmandu.

At Kathmandu airport, our vehicle, staff, and driver will be at your disposal for a short drive back to your hotel, after a marvelous morning with exciting moments on Gosaikunda Heli Tour. 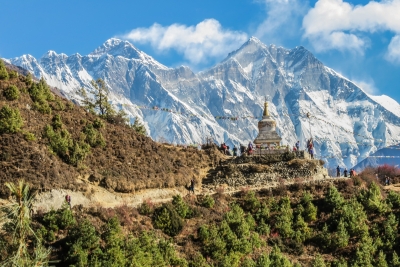 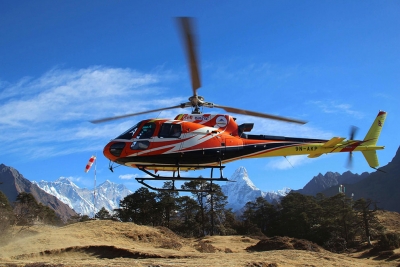 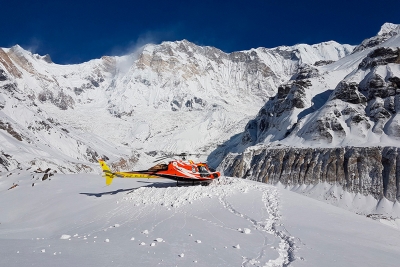